The Cirque du Slay is not for the faint of heart. Our twisted Carnival of clowns and creatures appeared as though summoned by a dark force.  Step right into the terrifying thrill of a lifetime but beware….. this show is killing IT!

Enter if you dare! 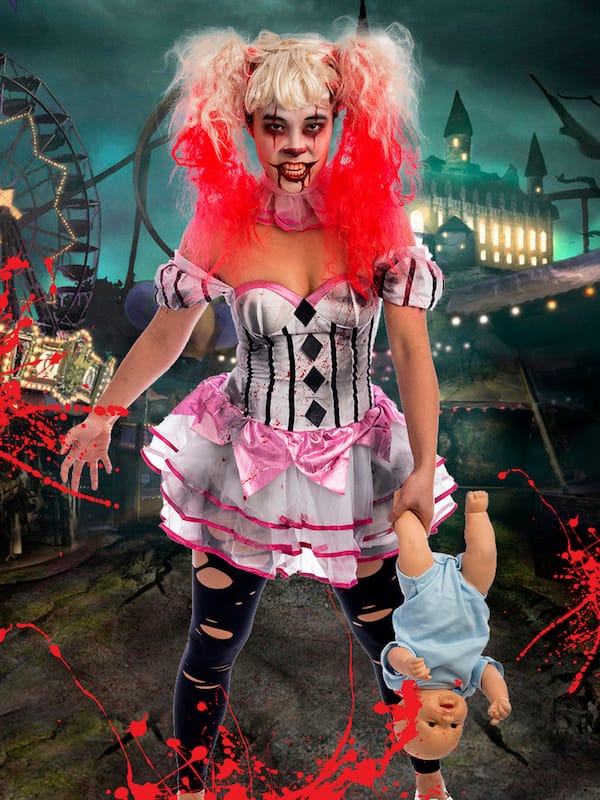 It was Halloween and the Circus had come to town.

The field next to the Burnley Bridge was always so barren and deserted but overnight it had transformed into a three-ring circus, literally.  Now, hundreds of local residents were standing in the field, munching on puffy pink clouds of cotton candy and sipping on lemonade, waiting for the show to begin.

The acrobats were first with their spiral handsprings and twelve person pyramid.  Then they took their places on the high rope and began to twirl.  The crowd was stunned, however, to see that all their faces were bloody.  But, they assumed it was all just part of the act.

The audience looked on with anticipation, gasping as the daredevil performers danced and balanced.  But something wasn’t right.  Behind the big red curtain, noises could be heard. Laughter and blood-curdling screams.

As the acrobats completed their act, a juggler took the stage.  His face was sad.  He appeared to be under duress.  The Ringmaster walked on stage and smiled at the audience.  He was a short, thin man with slick, black hair and dark, mean eyes.  He wore a black and red silk suit with ugly pointed shoes.  He shot an evil-eye over to the acrobats.  They suddenly and eerily simply disappeared.  The juggler grew even more nervous.

The music swelled.  The juggler looked nervously at the Ringmaster. He began to shake and accidentally dropped two of the knives he was juggling.  Then, out of nowhere, two members in the crowd screamed.  The knives that had been dropped on the stage appeared thrown into the seats in front of them.

To salvage the performance, the ringmaster picked up the knives, reared back and threw one at the juggler, barely missing him as the blade whizzed by.  No one was sure if it was a planned act…or not.  The second knife quickly followed thrown at the juggler.  This time hitting him in the chest.  The crowd was silent, confused.  Did the ringmaster just kill the juggler?  Or, was it all just a good, yet eerie act hitting all too close to home?

All the uneasy guests were distracted when the clown debuted.  The children all turned to see him for Zozo was the main attraction of the circus.  But when he looked up to greet the crowd, it was suddenly quite clear that something was amiss…something horrifying.

His teeth were of rusted silver with pointy jagged edges.  They clanked when he opened and closed his mouth as blood came flowing out.  The crowd braced, fearing for their lives.

A little boy was eating his candy apple.  He looked up to see Zozo, but the minute the clown looked his way, the little boy vanished in thin air.  The crowd gasped in disbelief.  Was this some freakish stunt of the performance?  How did they pull the illusion off…if it even was an illusion? There were beginning to realize, beyond hope, that is was terrifyingly real.

Zozo turned his back to the stunned crowd.  Then he turned back around.  Blood was dripping from his eyes and his mouth.

“Welcome to the show,” he announced in a creepy, almost demonic sounding voice.  “Yes…welcome to Cirque Du Slay!”

Enter if you dare.  This Circus is not for the faint of heart.  Step right up to the thrill of a lifetime but beware…for some it’s the show that never ends.