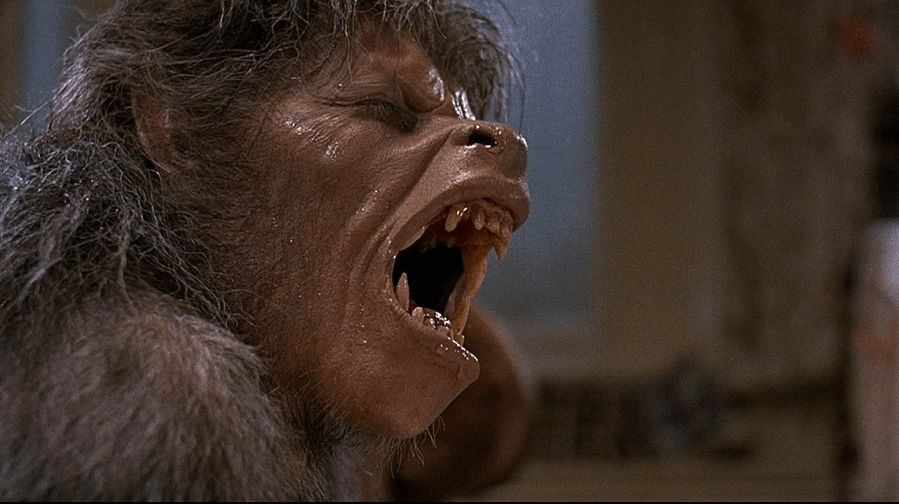 These days, special effects in movies have reached an unprecedented quality. They are usually incredibly convincing, and many people rate movies highly based on their special effects alone. A storyline helps, of course, but it seems that we are suckers for amazing special effects!

There was a time when special effects were not all computer-generated, and special effects artists had to do most of the work. It’s interesting to look back at films from the 1970s up to around the early 2000s. We can see truly impressive work created by these artists, who had a talent for terrifying us with their mind-blowing creations.  In this article we’ll take a look at ten of the best special effects in movies from this era:

The dog transforming to an alien scene was disturbing to say the least. The Thing imitates a research station dog, which later splits open, develops a prehensile tongue, tentacles and spider-like legs. It then grows a second head, before bloating out and pulsating.

Next comes a set of claws, and the creature’s flesh tears open displaying an appendage somewhat like a flower, but containing rows of canine teeth and twelve tongues. This scene was created by Stan Winston and his team.

In another scene, (often referred to as the “chest chomp”) Dr. Copper tries to revive Norris with a defibrillator. Norris’ chest opens up and Copper puts his forearms into the opening, only to find them severed from the elbow down by a set of jaws in Norris’ chest. Rob Bottin (the main special effects guy for the film) used a double amputee and fitted him with prosthetic forearms that could be pulled off by the mechanical jaws at the crucial moment.

The death of Tina Gray happens 13 minutes into the film, and it’s one of the most shocking horror scenes from the Eighties. When she confronts Krueger, her boyfriend has to watch helplessly as she smashes against walls and then up to the ceiling, before dropping lifelessly onto the bed.

The opening scene was filmed in the boiler room of an old LA prison (Lincoln Heights Jail); it has such nasty energy that the crew said they were scared to be in there. David Miller was the artist responsible for the special effects that made Freddy Krueger a permanent resident in our nightmares to this day! The special effects can be seen stage by stage here in this ‘behind the scenes’ summary

‘Chest-bursters’ are those familiar, gruesome aliens famed for tearing their way out of unsuspecting space crews’ stomachs. They look like huge beige or brown worms, with mouths full of sharp metallic teeth, as well as tails that can propel the creatures at lightning speeds.

Crew member Kane, while eating with his crew, starts to convulse with pain. The crew fights to contain him, but a little alien bursts out of his chest, killing him and escaping quickly into the ship. The bursting moment was filmed using a plaster puppet, created by Roger Dicken. Dicken himself thrust the puppet upwards on a short pole for the scene.

In American Werewolf in London, two American tourists in England are attacked by a werewolf, which no locals will admit really exists. The special effects were created by Rick Baker, who incidentally got his first Academy Award for it. 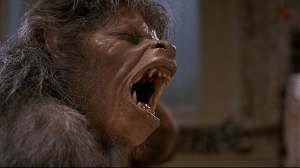 The tourist to werewolf transformation scene took a whole week to shoot, and actor David Naughton had to spend several hours in makeup just for a minimal number of shots. David had to sit stock-still throughout each take while fur and prosthetics were added piece-by-piece. That’s how they constructed the scenes of hair slowly sprouting out, the face changing shape, and fangs growing from nothing. Impressively repulsive!

Brundlefly’s metamorphosis is another movie scene that sticks in the minds of unprepared viewers for years to come. This is the tale of an eccentric scientist, Seth, who decides to teleport himself in an experiment. During this, he’s oblivious to a housefly that had slipped into the transmitter pod. 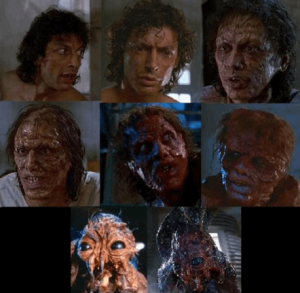 He then slowly turns into hybrid creature, part man, part fly. The film is full of amazing special effects, created by Ted Ross. Ross said that the practical effects from The Fly were very difficult to create, but he certainly did an unforgettable job of them.

The exploding head scene in Scanners is totally disturbing. A private security firm called ConSec has plans to showcase a powerful potential weapon, known as “scanners”. These are psychics with powers such as telepathy and mind control, biopathy, empathy, telekinesis and more.

When ConSec’s scanner demonstrates his powers, a volunteer happens to be a stronger scanner. This causes the ConSec scanner’s head to explode in a revolting display of clever effects. It happens because of hydrostatic shock due to biopathically-increased blood pressure, and the results are mortifying!

In Dawn of the Dead, zombies tear open a biker’s stomach and feast on his entrails. This skin-crawling scene was filmed over around four months between the end of 1977 and start of 1978, on a budget of only $500,000. Tom Slavini was responsible for zombie make-up effects. In this gruesome scene, the raider known as Sledge has his abdomen torn open by a bunch of crazed, hungry zombies. 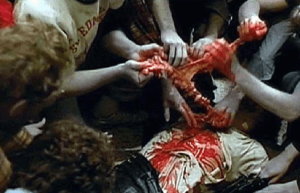 To achieve this scene, Slavini made a false chest appliance and stuck it the actor’s chest from neck to groin. Inside it he encased blood tubing, and real sheep intestines! The zombies simply had to tear the foam stomach open and act their parts.

In Hellraiser, we witness the story of Frank (the main antagonist) and Julia’s love affair. This involves skinning people alive, and a smattering of leather-clad demons. Frank’s rebirth from underneath the attic floorboards is sickening at best, cleverly executed by designer Bob Keen and his crew.

Once a sexual athlete with a love of money, Frank is now a stomach-turning, skinless and gristly mess of a man, so he must hide in the dingy attic. He tells Julia that he requires blood sacrifices so that he can reconstitute himself. Julia, wanting her man back to his former state, starts to lure businessmen home to smash their skulls with a hammer. Frank’s reconstitution will not leave your nightmares in a hurry.

The Blob was an unusual horror movie for its time, and filmed on a very low budget, which makes Bart Sloane’s special effects even more impressive. Strangely, it was made by a group of devout Christians and became one the most successful sci-fi films of the 1950s. 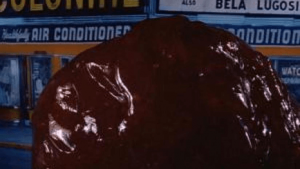 The film’s use of colour and simple special effects were very effective, and the simple creation that is the red, shapeless, gelatinous alien life form that engulfs everything it touches. The Blob is a mixture of red dye and silicone that has never dried out. It still exists in the original five-gallon container used to send it to the production company in 1958.

Teenagers Meg and Paul go on their first date and meet an old man with a parasite on his hand, being pursued by a bad boy called Brian. Paul and Brian eventually agree to take the old man to hospital, but alas Paul and the old man are eaten by the blob. Nobody believes Meg’s story, so she and Brian have to halt the creature’s path of destruction somehow.

The script may be clichéd and the plot twists ludicrous, but nobody who has seen high tension forgets it in a hurry. The chainsaw assault scene is unbelievably horrifying and promises to haunt you for years to come.

The crazed killer jumps onto the hood of a car wielding his chainsaw, before smashing through the windshield with and plunging into the driver’s chest and neck. The poor woman in the back is covered with blood and gore. Giannetto De Rossi is the man responsible for the gruesome special effects seen in High Tension, and he’s also worked on Once Upon a Time in the West, Zombi 2, The Beyond, The House by the Cemetery, and Dune… in other words, he’s had plenty of practice at traumatising us. Where others often fail, De Rossi convinces.

This glimpse into dated special effects is educational, to say the least. Who knew so much talent was required? We may prefer to be wowed by the superior special effects currently available, but it’s still worth indulging in the occasional old classic… we wouldn’t mind betting they’ll still have you on the edge of your seat, and that’s truly saying something about the skills of these special effects masters. Bravo.